Are you new to marketing and want to know how much does Facebook advertising cost to reach more customers?

In a world that is saturated with advertisements, businesses are finding older, traditional forms of marketing less and less effective. People these days know to mute the TV during commercial breaks (if they’re not already using a commercial-less streaming service such as Netflix).

So, if your previous advertising methods are no longer working, how do you market your business effectively?

For many businesses, the answer is Facebook (check out some of our social media advertising case studies for proof!).

Over 60 million businesses have a Facebook page, and if you’re not one of them, you’re missing out!

If you’re not super familiar with Facebook (or even if you are), let’s dive into some helpful facts to set the stage.

Facebook sees 1.32 billion active users every single day, and 400 new users sign up for Facebook every minute. By sheer volume alone, you’re bound to find a percentage of your target audience on this platform.

You may be thinking, “Okay, so there is that many people using Facebook. That doesn’t mean any of them are making purchases.” Wrong!

26% of Facebook users who clicked on ads reported making a purchase.

If we just look at what 26% is of daily active users (not even monthly active users, which is higher!), then we’re talking about 343,200,000 people who are noted as making a purchase from Facebook ads- and that’s just from one report.

What’s more is, no matter who your target audience, you can make sure you’re tapping into this 26% with the behavior called “Engaged Shoppers.”

Add this behavior into your demographic so as to target anyone within your target audience who has clicked the “Shop Now” button on Facebook within the past seven days!

So your target market is on Facebook, they are making active purchases, and you can reach them with Facebook ads. Now the question is how much does Facebook advertising cost?

We’re going to break this question down into a few different parts to explain how much Facebook advertising costs business owners just like yourself.

Facebook advertising costs are different for every business. Thus, it’s important to start with the basics. Such as, looking at service fees to run ads and testing what kind of campaigns work for your business specifically.

First thing’s first, there are no membership or service fees to run Facebook ads.

Facebook Ads Manager is free to use; you will need an advertising budget to run your ads, but that is all. 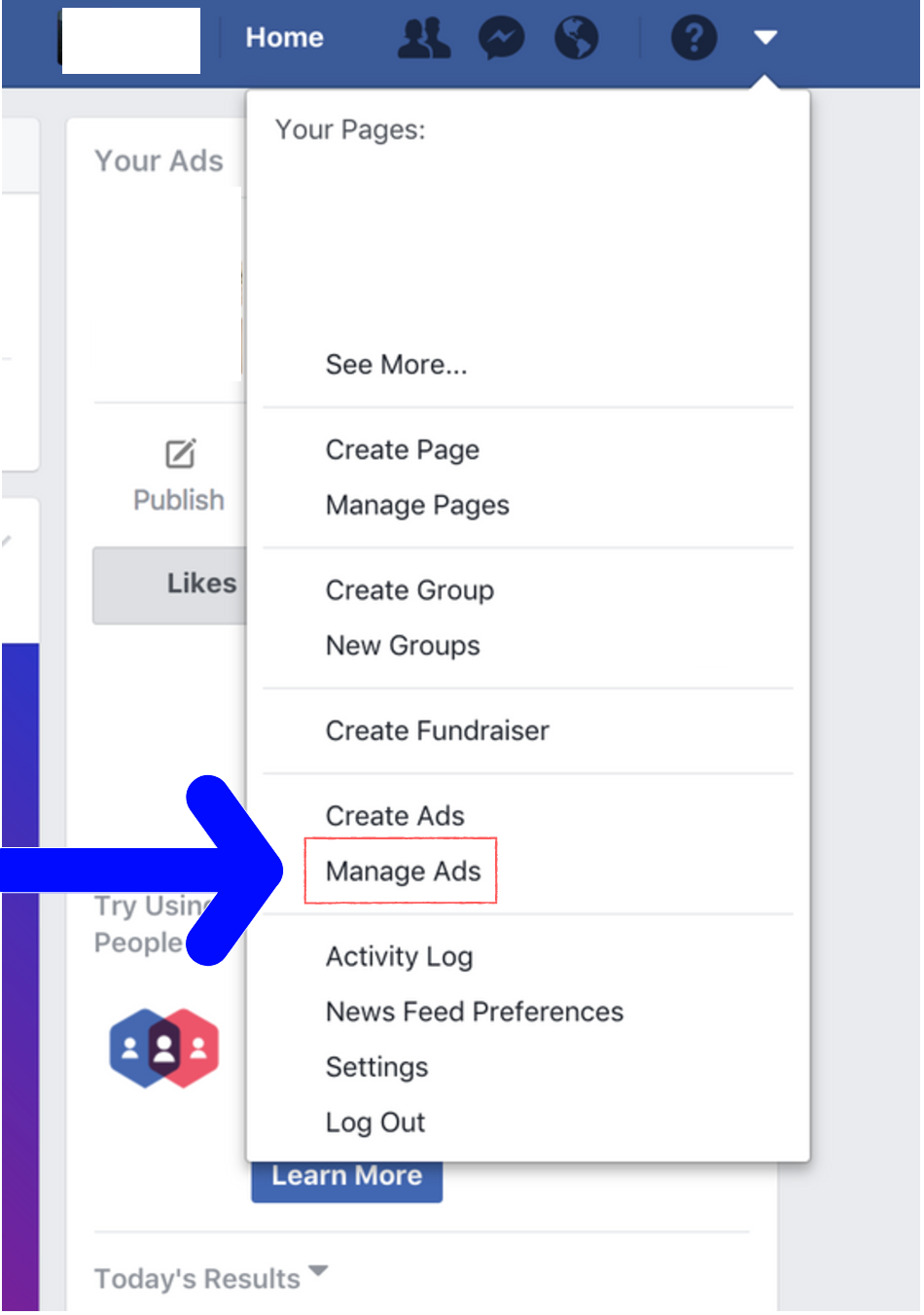 Look for the drop down arrow on the far right of your upper tool bar, and click Manage Ads (or Create Ads if you’ve never ran any Facebook ads before) to access your Ads Manager account.

Now that we’ve established that there are no membership or service fees, let’s dive more into the advertising budget (this what we really mean when we talk about Facebook advertising cost).

Your ad budget goes directly toward your advertisements to sustain them and deliver them to your target audience. Depending on what type of advertisements you want to run, there are different Facebook advertising cost minimums that you will need to meet.

Pictured above are the different types of Facebook ad campaigns that you can run. Each campaign is geared towards a specific type of audience.

This is where some actions become cheaper than others. For instance, you can boost a post under the Engagement campaign for as low as a dollar a day, but for other campaigns you may need $5 a day to even run the campaign at a all.

Now, we’re referring to these budgets in daily terms, but ideally you will want to think of your Facebook ad budget as a monthly budget.

The reason for this is because the longer a Facebook ad has time to run, the better.

This comes as news to a number of our clients who have ran a lot of two-week Facebook ads, but it’s true!

Facebook undergoes a learning phase with every single ad that is submitted, and the longer Facebook has to analyze your ads and gather data on them, the smarter Facebook gets at who to show the ad to in order to gain results.

The reason we’re bringing this to your attention is so you can prepare for an ongoing Facebook ad campaign with an ongoing ad budget.

When you set up your ads, Facebook gives you the option to set your ads up on an ongoing Daily Budget or a Lifetime Budget with a start and end date.

Ideally, you’ll want to set your ads up on a daily budget (take your monthly budget and divide it by 30 days) with no end date so that you can run the ad campaign indefinitely and only make changes as needed.

This allows Facebook to grow smarter at knowing which type of Facebook user within your target audience is going to produce the most results for you.

Keep in mind that so far, we’ve talked about the minimal ad budgets necessary to lift your ad campaigns off the ground; optimal ad budgets may differ.

So let’s talk about what an optimal ad budget looks like. Here at LYFE, we always tell our clients to start small, and then scale up on the ad budget once you find what’s working.

When you sign on for Facebook advertising services with us, you’ll see that we practice A/B split testing.

We’ll test different images and videos with different copies and deliver them to different target audiences to see which creative + message + audience combination is going to give you the most results at the lowest cost.

During this testing period, we recommend that you start out on the lower end of your budget (test cheaply!). This will help keep your Facebook advertising cost down while you figure out which ads work best.

With that, you may have these questions:

At the absolute minimum, we recommend you spend no less than $5 a day on any given campaign ($150 a month). Ideally you’ll want to spend closer to $300-$500 a month on each campaign you run to give it a fair running start.

Then, once you find the winning combination that is bringing you your desired results, you can shut the other ads off and invest more of your ad budget towards what is working in your ad campaign!

The last thing you will want to consider when running an optimal ad campaign is who you’re targeting and where. How big is your audience?

Generally the smaller the audience, the higher the cost per result will be.

Take factors like this into consideration when determining which ad budget is going to work best for you. If you’re targeting a local area and only want to invest $150 into your Page Like Campaign, ask yourself if 150 fans a month is what you want or not.

We’ve talked about minimal and optimal Facebook ad budgets, now let’s talk about the second part of Facebook advertising costs: bids. A bid is the maximum amount you want to spend when a user takes action on an ad.

The bidding portion can be a little tricky to new advertisers, so let’s break it down a little bit.

Think of a normal auction where people are bidding for an item they want. In this case, advertisers are bidding to Facebook to have their ad shown over other advertisers who are trying to show their ads to the same target market.

The difference between a normal, real-life auction and bidding on Facebook is that Facebook does not automatically deliver ads from the highest bidder; this means you’re not always going to get out-bid by an advertiser with bigger ad spend.

Facebook will review your bid, the likelihood that users will take action on the ad, and the quality and relevance of your ad content before serving ads to its users. These factors determine how Facebook chooses a “winning” ad. The CPC model is when you pay per person who clicks on your ad. The CPM model is where you will pay per thousand ad impressions, or per every 1,000 potential customers who view your ad on Facebook.

You will want to take the bid into account when you think of Facebook advertising cost because your results versus what you pay for can vary depending on whether you’re paying for clicks or impressions.

The last item you’ll want to consider when bidding is who you’re targeting. We mentioned earlier that when you bid, you’re bidding against other advertisers targeting the same audience. Certain targeting options on Facebook are really popular amongst advertisers (and are therefore more expensive).

For example, many Facebook advertisers like to target people with an upcoming birthday and show them a “Happy Birthday” ad with a “free gift” so as to attract their attention.

You can expect to pay more (and bid higher) for a popular audience like that one!

Facebook announced its plans to launch a new strategy for bidding in 2020. This time, it will be more focused on driving results while at the same time keeping costs down. We can recall that the current bid strategies mostly focused on increasing conversions (bid cap) or cost’s predictability (target cost). But in this new bid strategy, it will target both.

That depends solely on each business and their budget. The new cost cap bidding strategy lets the advertisers set the maximum CPA/CPI that they are willing to pay for their ads.

Ad Creatives (And How They Really Do Affect Facebook Advertising Cost)

Earlier we said that Facebook reviews the relevance and quality of your ads to determine whether to show your ad over others or not. In this case, “relevance” is a very real term.

Facebook gives every single ad a Relevance Score after the ad has received 500 impressions.

Relevance Scores are given on a 1-10 scale based on users’ interactions with the associated ads (10 being the best and 1 being the worst). If users are seeing your ad and blocking it or hiding it from their newsfeed, then that will result in a lower Relevance Score.

If your ad has a low Relevance Score, then it will fall behind in the bid, and ads from other advertisers who are targeting the same audience will be shown over yours!

The rule states that you cannot have more than 20% text on any ad image or video thumbnail; if it does, the ad will not run.

Keep this in mind as you develop your ad creatives because it directly affects your Facebook advertising cost.

The last thing we want to touch on is campaign optimizations. Earlier we talked about the different campaign types and how they optimize differently per objective.

Use these different campaign types to your advantage when planning out your ad campaigns.

Ask yourself what you are looking for with your ad campaign, and make sure that those are the results you are paying for.

If you’re looking to grow your Facebook followers, a website traffic campaign may not be the campaign you want to invest in and vice versa.

It’s important to strategically choose which ad campaign you want to run so as to not waste your advertising dollars.

If your ad campaign is measuring results by a different standard than you are when you’re crunching numbers, then it may be time to re-evaluate which Facebook ad campaigns you’re running!

Previous Post Email Personalization: How to Make Your Business Emails Inviting, Not Creepy
Next Post How To Create the SEO Content Marketing Strategy You’ve Been Needing